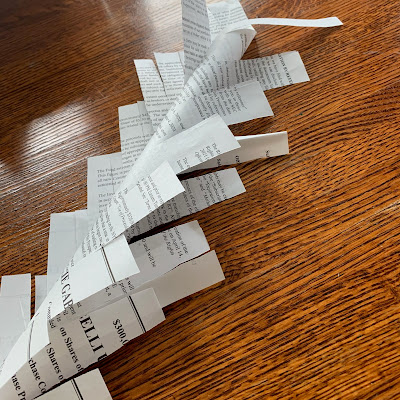 I remember making these with my mom out of the colored funnies. 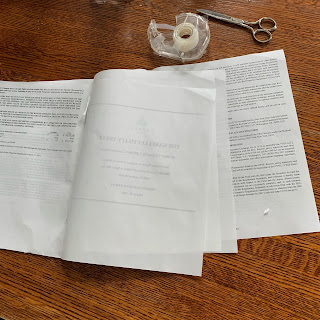 Gather supplies--paper (I used a financial prospectus), tape, and a good scissors BUT NOT THE GOOD SCISSORS. 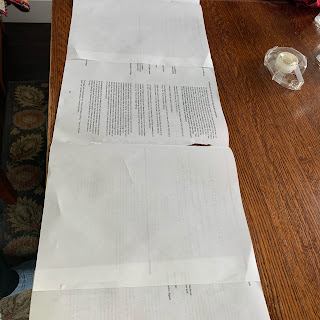 Lay out the paper, overlapping by about an inch. Tape the junctures in two places. 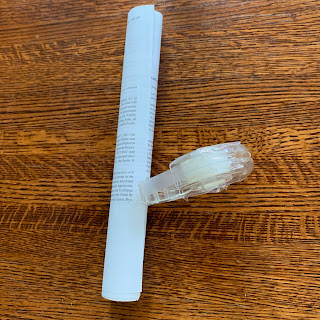 Roll up the paper into a tube a bit smaller than a toilet paper tube. Tape about 4 inches from the bottom. 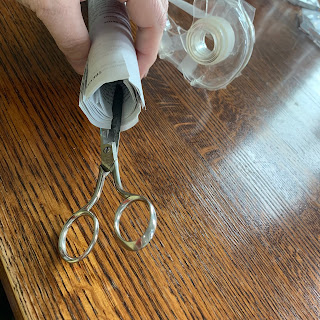 On the top end make four cuts in the cardinal directions, about 6 inches long. 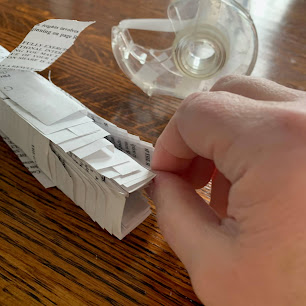 Reach into the center and tug on a few pieces of the paper. 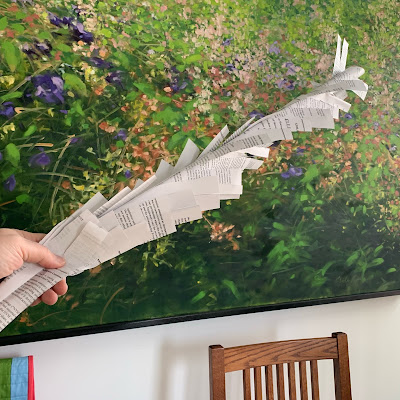 Pull out the palm. You can staple the base about 4 inches from the bottom for some stability.
You now have a paper palm to march around with on Palm Sunday!
Posted by Lynn Dykstra at Sunday, March 28, 2021 2 comments: 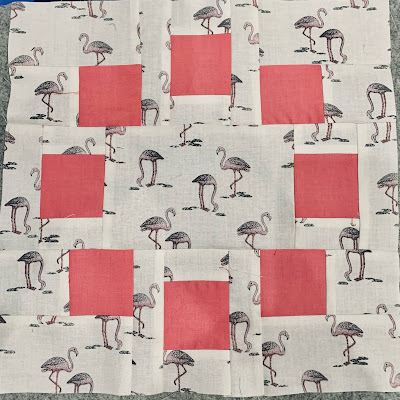 I have seen this block on the web. I have not been able to find the origin of it--if you know please let me know and I can include that information here.

UPDATE: Blog reader Mego says it is a block from a while back called Circle of Friends.
I did a bit of research and that name is used for several other blocks too, but one similar to this one I can trace to at least 2011.  I also saw it named as A Circle of Squares. All I have found had more pieces and were set in a 9-patch formation.
I'll update again when I learn more.
And, go check out Mego's blog--it is really fun!
https://basketfullofscraps.blogspot.com/
Reader JoyceLM reports Windham fabrics has a tutorial for the 9-patch version:
https://windhamfabrics.net/cgi-bin/fabricshop/projects.cgi?patternID=706
I am glad to see there are several versions of this out there so I am not appropriating one person's work. I do hope to eventually find out who came up with the idea.
There are also versions with circled triangles. Which are now on my list!

The blocks I saw were constructed in a 9-patch fashion.
Because I wanted to use prints for the background I re-drafted it to keep a larger portion un-pieced and oriented the corner units to keep their rectangles horizontal. This calms down the fracturing of the prints and allows the squares to visually float over the block.

Block construction and pressing
Lay out block, keeping the 2 1/2 by 4 1/2 rectangles horizontal 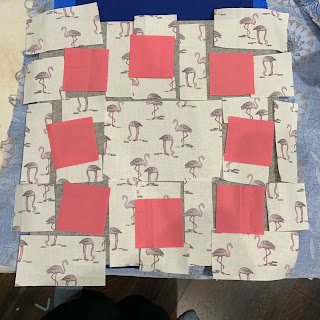 Pressing is odd but it makes sense in keeping the block square and for when the quilt is ready for assembly. There is no nesting at all in block construction, so careful sewing is in order.
I press from the front of the blocks, so in the pictures when I say press to the right, some will show the back of the units and they will look like to the left--sorry about that bit of head twisting. 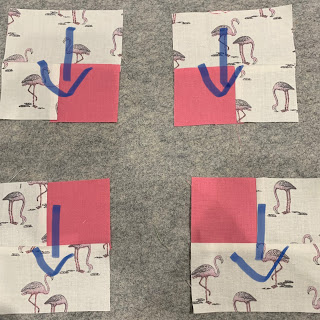 Press the center unit so all seams go to the right.
Press the upper and lower unit so all seams go to the left. (except the seams around the solid squares--let them stay the way they were pressed earlier.
(In construction, some of the pressing is not necessary to be the way I do it. But it makes sense in keeping the pressing consistent in one direction for each row so I am not constantly thinking does this seam matter later on or not.)

Join the three rows. There are no seams to match, so be careful to not distort as you sew the long 12 inch seam.

Wait to press the final two horizontal seams until it is time for assembly.

Lay out the blocks is complicated to describe but is not complicated in process.
Lay into columns, rotating every other block, keeping the center row horizontal. Make sure you start each first block of a column rotated opposite of the one next to it, then rotate the blocks below it so all blocks nest both north and south and east and west.

Sew into columns.
Then, press all seams of odd columns up and even columns down.
Sew columns together.
All seams will nest.

I will post pictures of this process when I assemble the quilt top.

My adaptation of a block out there.
Use at your pleasure. 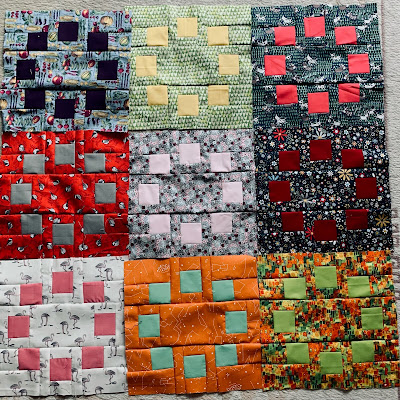 calendar quilt, three quarters of the year on 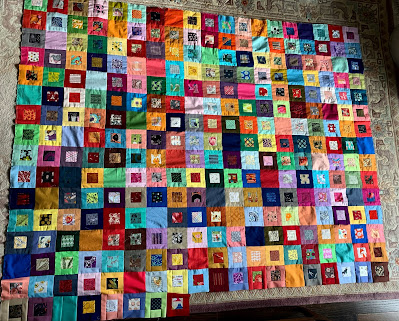 I started this on my birthday in July. Andy likens it to a prisoner checking off days on the wall of a cell.
There is a square for each day. I don't work on it every day, rather get caught up on weekends.
Posted by Lynn Dykstra at Thursday, March 25, 2021 4 comments: 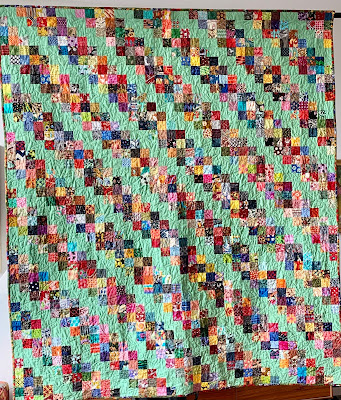 Quilted by Sue Divarco using a pantograph of tumbling children

Made with 2 1/2 inch squares from my scrap boxes along with squares my small group has sent to each other in a round-robin envelope during these covid times.
Directions are here:
https://kleinmeisjequilts.blogspot.com/2020/08/jack-and-jill-with-round-robin-squares.html
My design, use at your pleasure. 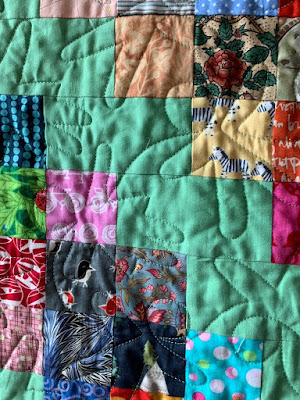 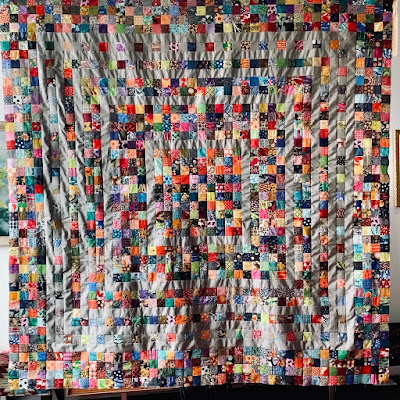 Deanna over at Wedding Dress Blue has a tutorial for her Fading Charms quilt. She offers it in three sizes, using 2 1/2, 2. or 1 1/2 inch patches.

It isn't photographing well--it is more beautiful in person. I hope when it is quilted it will look better.

My 2 1/2 inch squares boxes--yes, there are multiples--were no longer shutting. This after making three quilts this past year from them: the Jack and Jill squares, the Orange Medallion 16-patch, and the ongoing Calendar quilt. So I went for Deanna's 2 1/2 inch size. I also went beyond her 72 inch top by adding a 16-patch border to use up even more of the squares. It took 40 16-patches for the border.

Deanna's pattern takes 846 squares. My 16-patch borders took another 640. That is 1486 squares out of my boxes. This used up 1/4th of my squares. I have more plans! I love having these squares ready to go when inspiration hits.
Thank you, Deanna, for sharing your great ideas.

I used a taupe Bella solid, BLK0119 for the frames. I cut them with the lengthwise grain. I found it best to always sew with the patchwork on top and to always press to the solid frame. Will likely use a wool batt to help reduce the weight of the quilt and bind with the taupe.

All my 2 1/2 inch squares quilts this past year include patches my small group shared in our mailed round-robin. These packets arrive about every 2 weeks and are such a joy to open and see what others have been using in their quilts. Those little LaCrosse sticks came from the exchange--love them. 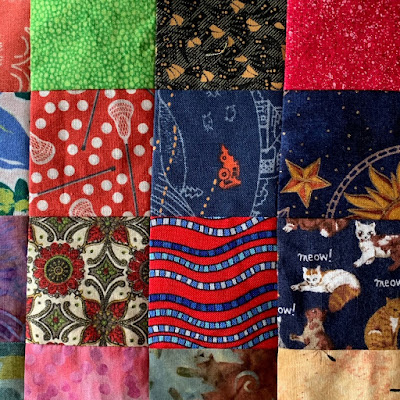 St Patrick's Day is a fine day for a wedding. 37 years. 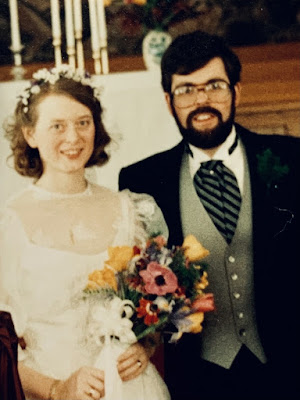 Our second anniversary in quarantine!
The one on the right is vaccinated.
Posted by Lynn Dykstra at Wednesday, March 17, 2021 6 comments:

Labels: archives, St Patrick's Day is a fine day for a wedding 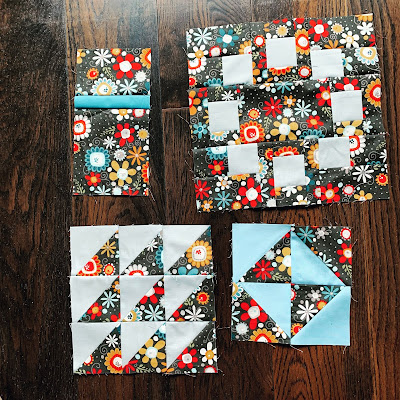 Working out the pressing plan on these sample blocks to see if they will progress to actual projects.
Posted by Lynn Dykstra at Sunday, March 07, 2021 6 comments: 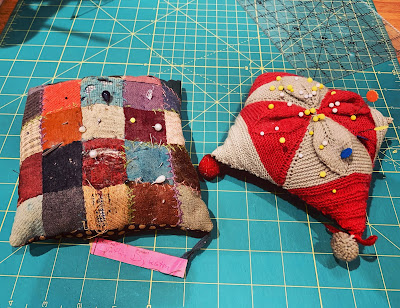 My grandmothers’ pincushions. Both made of wool and stuffed with sawdust I believe. Left, the patchwork one belonged to Cynthia Meerdink Dykstra. She told me it was her mother’s, Lena Huibregtse Meerdink. On the right the knit one with the little pom poms belonged to Ella (Hillegen) Diekevers Scholten. Such fine knitting. My mom said she didn’t think her mother knitted and it may have been made by Ella’s mother, Carrie (Graada) Rabbers Diekevers who did knit.