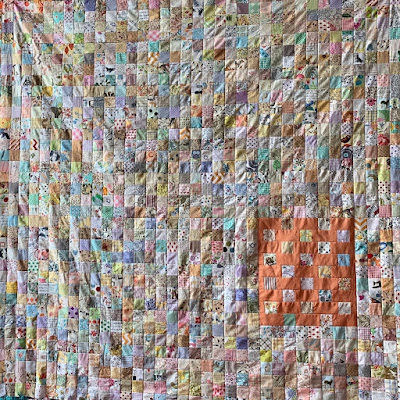 How an idea is sparked.
When I sorted out the light 2 1/2 inch squares from the dark squares used for the Jack and Jill Round Robin Squares quilt, they sorted themselves into a pile that had me make neutral 16-patches. 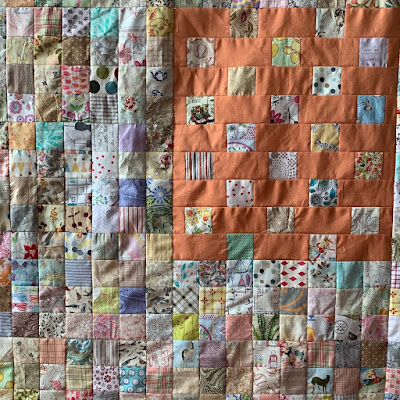 I first worked on graph paper to get my proportions. Moving to cloth had me re-think and I added some more blocks.
I made a pile of 16-patches, then assembled the medallion. To complete the quilt I worked my layout with the blocks showing back-sides to ensure nesting of most seams. There are a few "twisted sisters" on one side of the medallion.
This could be planned out in advance, but it worked well improvising.

Medallion piecing: (I intended to use a stronger orange, but this soft one worked better. I am not sure of the manufacturer.)
23 orange rectangles cut 2 1/2 by 4 1/2 inches
8 orange squares cut 2 1/2 inches
THEN I added 3/4th sections of 16-patches to the bottom of the orange section so the medallion would measure 2 by 3 16-patches and it could nest into the surrounding 16-patches.

Because this was improvisational work the blocks were not assembled in rows. I did manage to make all seams nest except along one side of the medallion.

This quilt is leading to another using 16-patches made with darker squares and a different medallion.
I'll also work on a post about how I construct 16-patches with an eye for how they will nest later into a quilt. 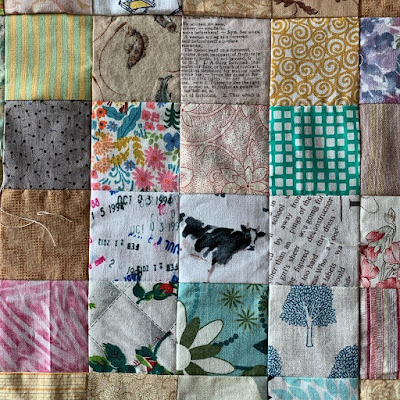