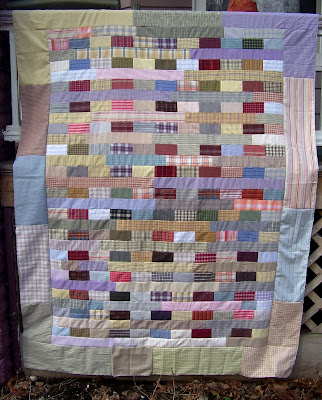 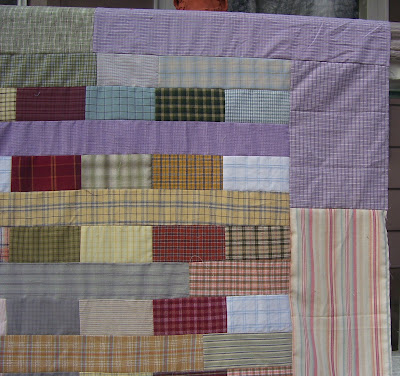 More shirt parts.
I wanted to encourage use of lights, (and this quilt certainly uses up a lot of them) playing with the negative space.
Rows are 6 lights and 5 darks, cut 2 1/2 by 4 1/2 inches.
Alternating rows are random pieced lights, made from 2 1/2 inch strips.
Borders are from 6 1/2 inch strips.
I have been cutting down all shirt parts (except the backs, I leave them alone for odd shaped pieces) into strips 1 1/2", 2", 2 1/2" and 6 1/2".
My mother reminded me of her stacked bricks quilt she made in the 1970s out of wool scraps, shown below. She used an old coat of hers for the background rectangles. My recent quilts seem to be channeling this quilt. 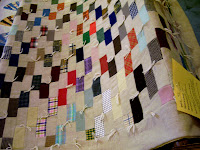 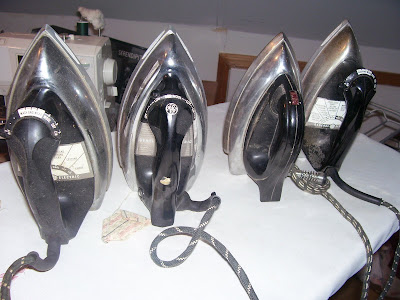 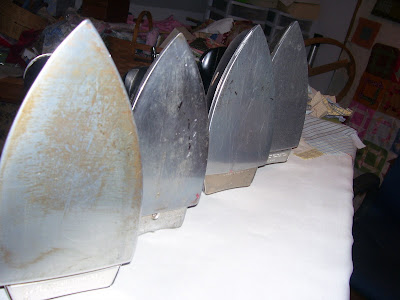 There is much discussion among quilters about which iron is best. I had a Rowenta that I liked for its weight. I don't understand why manufacturers boast about their light weight irons--makes you have to push down harder using your shoulder muscles.
But, the Rowenta spit alot, giving me several burns, so I finally only used it with a spray bottle. I had it fixed once at great expense, and the second time it died I threw it away.
By then I had discovered the joy of using an old non-steam iron. They have no holes to catch little points on quilt parts and get so hot I rarely need to use a spray bottle, the ambient moisture in the fabrics is enough.
I pick them up at yard sales and thrift shops. The sole plates clean easily because there are no steam holes to get gunked up.
These four are now in my collection (I also just like how they look).
The Sunbeam is really heavy. The other three are General Electric.
Two are 1100 watts, two are 1000 watts.
I also love my old General Electric Waffle Iron. 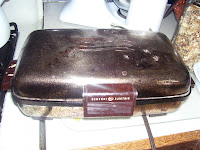 This is my second one, my first wore out. I love it because there is no teflon so it really bakes rather than steams the waffles.
So, search the thrifts or yard sales. Unless you live in Chicago, where I ask that you forget everything you read here so I can find these remaining treasures.
Posted by Lynn Dykstra at Saturday, February 21, 2009 4 comments: 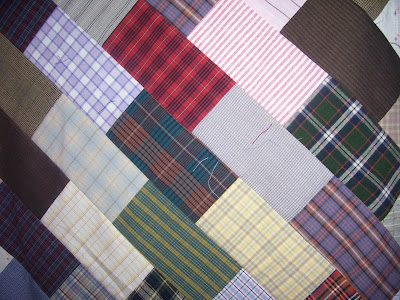 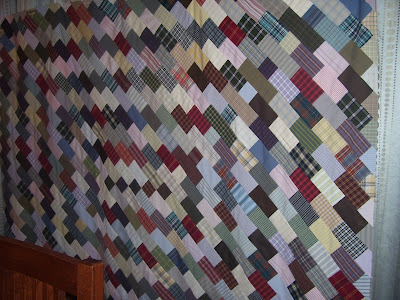 When I wasn't feeling well, my friend Barbara told me to haul out my quilt magazines and find an "old favorite" pattern that I've always wanted to do but just never got to.
I've always liked the Boston Commons. (I love the idea that this park and city center is named for the common pasture. My home town's common pasture became the park behind my grandparents house when they retired from the farm.)
My construction of the pattern is a bit different from the traditional. Made with shirt parts, it is indeed common. It was a contemplative piece in that I had to use pins on for each patch to ensure the staggered bricks came out correctly. (I rarely use pins other than for borders.)
I will keep it common by not adding a border, just a dark binding. 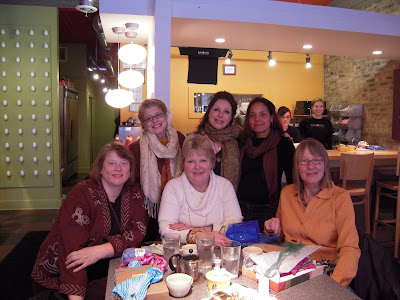 When Paul was 4 and starting preschool I made friends with these women who all had children starting school. We met to knit weekly and our called ourselves "Tuesday Knitters". Our older children are now in their 20s. We gather annually on Super Bowl Sunday. I look forward to this every year.
Posted by Lynn Dykstra at Sunday, February 01, 2009 No comments: