In 2013 my friend and pastor Avena asked me to make her a liturgical stole to wear during the white seasons (Christmas, Easter, and special occasions like weddings). You can read about the stole here:
https://kleinmeisjequilts.blogspot.com/2013/04/making-liturgical-piece.html

She asked me to incorporate a quilt top her grandmother made from Avena's childhood and youth clothing and other family sewing projects that her mother cut into squares. Her grandmother was quite far into dementia and the construction of polyesters, rayons, and cottons was puckered and poofed.
I used it as the lining of the stole so it was close and private to Avena. I loved how when she walked the bottom hems would flare out and we could see a peek of the patchwork. 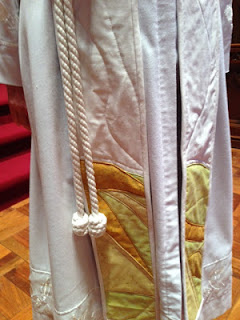 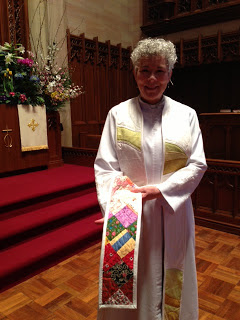 I asked Avena what to do with the remainder of the patchwork and she said I could discard it. Instead I tucked it away thinking someday there might be a grandchild. And, over 7 years years later, and despite our move and Avena's retirement and move across the country, I knew where it was when I heard Baby was with us.

It was too fragile to handle quilting on my domestic machine, so my friend Sue Divarco took it on her longarm with my request that all I wanted was for it to be flat, let tucks form where they will. She quilted it quite densely. I used a 1930s reproduction for the back, a nod to Avena's grandmother. The fabrics of the patchwork I date to range from the 1920s to the 1970s. I used 6 leftover pieces of red binding from my own quiltmaking. 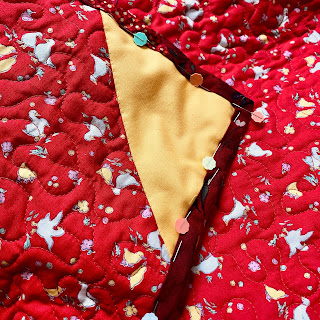 Because I had cut away a portion of the patchwork for the stole there was a remnant rectangle of patchwork I trimmed and bound to make a small table mat. I like that there is a stain in the black gingham!

In the end very little was discarded. Most of the patchwork went into the stole, the quilt, and the mat.

working on the alphabets 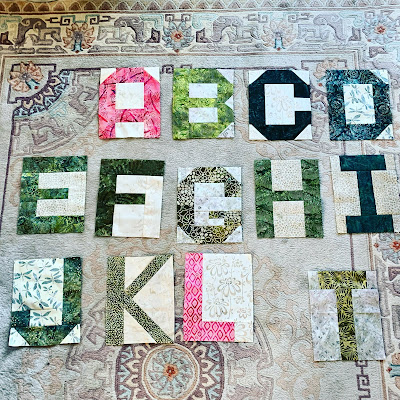 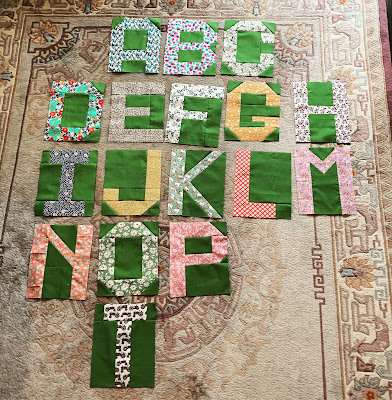 It has been a busy semester, but I have found time to make a few letters now and then. They will be my tax-prep-respite for the next few weeks.
Using the Moda alphabet, with my own modifications.