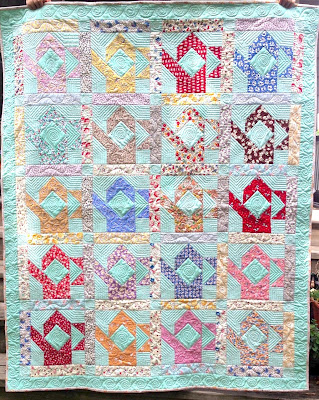 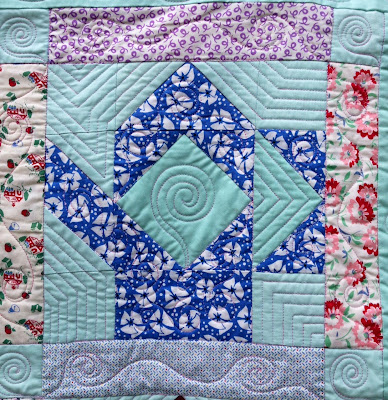 This was made for my dear friend, neighbor, and quilting partner Sharon Sliter Johnson.
We try to have tea together weekly. And, since we both have July birthdays, we celebrate the whole month.
The teapot block was in a McCalls magazine several years ago.
I found this cute tea party print for the backing.
Beautifully quilted by Suzette Fisher. 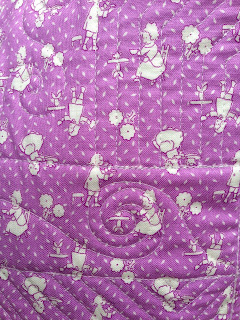 up on the roof--222 East Superior Street, looking east 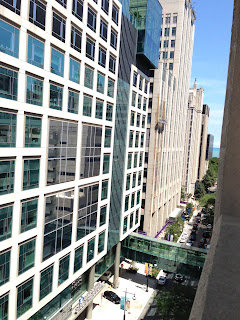 Labels: up on the roof 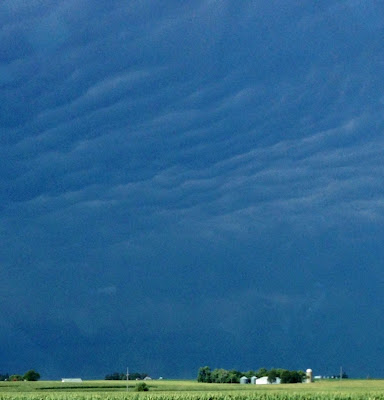 I drove in sunshine with the sky nearly perfectly bifurcated between fluffy white clouded skies and, to the north, intense storms.
Posted by Lynn Dykstra at Tuesday, July 23, 2013 No comments: 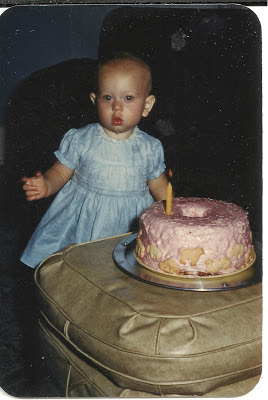 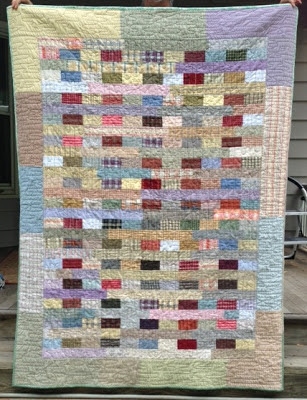 A useful part of having this blog is I can look back to see when I worked on projects.
The top of this quilt was made in February 2009, was quilted at some point, and I finally finished the binding an hour ago.
Made with shirt plaids, alternating lights and darks rectangles cut 2 1/2 inches by 4 1/2 inches.
Sashing random lengths of lights cut 2 1/2 inches.
Borders random lengths of lights cut 6 1/2 inches.
It is bound with three different greens--leftover from earlier projects.
I love this humble quilt.
My design--use at your  pleasure. 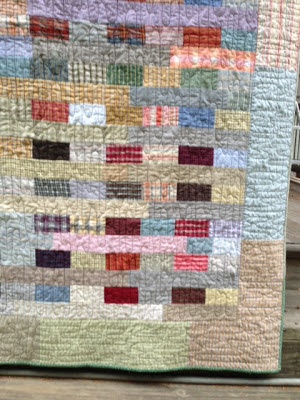 I used up two different ladybug prints for the back! 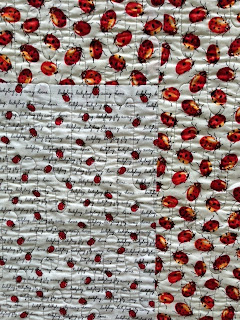 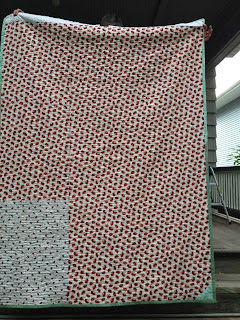 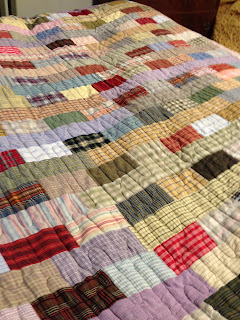 S is for Seth 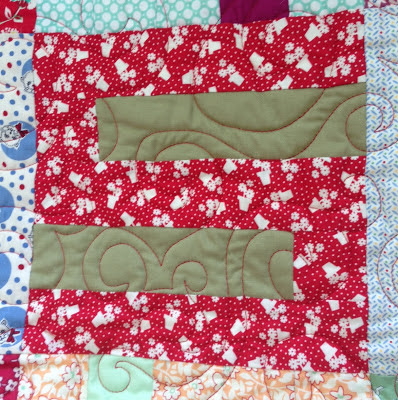 Blocks finish 7 1/2 inches. Was originally a Kaffe Fassett design.
The block is made from 2 inch cut strips.
After making the H quilt for my mother, Henrietta, from Wanda Hanson's idea, Seth asked for a S quilt for himself. 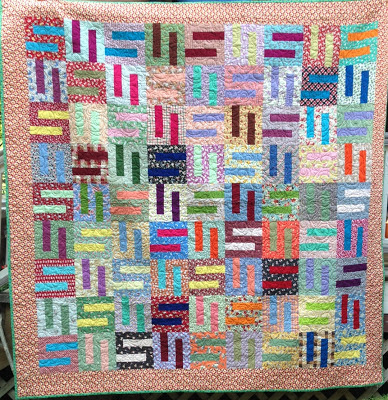 Are there P and E quilts in my future for Paul and Eve?
Quilted by Suzette Fisher.
Posted by Lynn Dykstra at Sunday, July 07, 2013 2 comments: 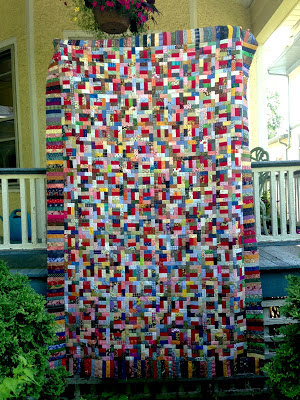 In making a scrap quilt, there is planning done at the beginning, then messing with that plan and adding other rules as I go along.
When cutting down of scraps, one size I cut is 1 1/2 by 2 1/2 inches and finish 1 by 2 inches. This is the proportion of the unit blocks used in preschools. 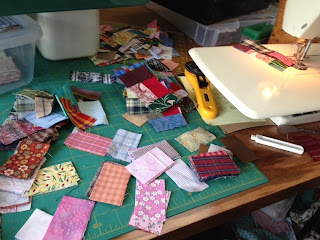 Tonya Ricucci has a wonderful quilt "Ellis Island" using lots of odd prints. I loved the look of her quilt and used that as inspiration for this one. I stayed with her 1 1/2 inch width, but kept my length at 2 1/2 inches to use up some of the many, many pieces in my bins. 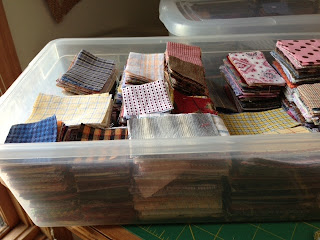 This quilt took 1920 of those patches-- 240 are red solids.
Each 4 inch block uses 8 of the unit patches.
I wanted the block to be not quite symmetrical visually, so I chose a setting (top) that had the red center off center. 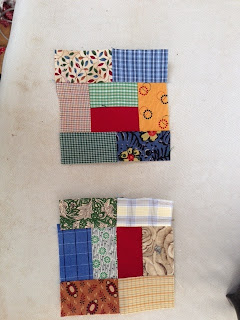 After making a few blocks, I realized that in a layout the reds would spin in a predictable way (which I did not want) so I made a second block (bottom) where the center is in a different configuration. The red solid was always kept to the interior of the block.
Then, I made the 240 blocks.
I pieced the blocks into pairs first, with every other block set at a quarter turn.
This made for fewer seams to match.
I put them together in various configurations of the two blocks, making the red rectangles very random in their orientation. 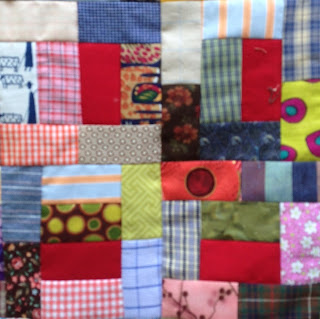 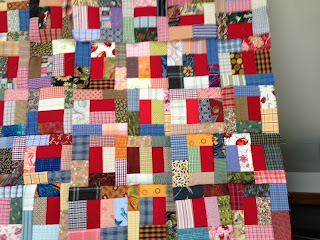 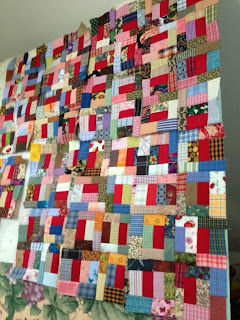 I added the piano key border (1 1 /2 by 4 1/2. also out of bins) when the top was still at the 32 block stage. I find this makes less distortion with piano keys. Also, I did not press the piano keys until they were sewed to the blocks--this way I could stay stitch the edges of the keys in the directions that made them nest into the blocks. 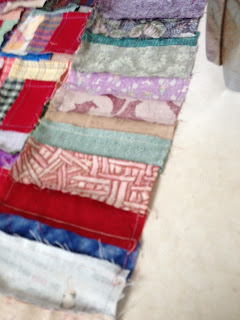 After the keys were attached to the blocks and stay stitched, I pressed them and put them back on the board. 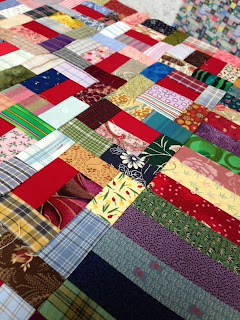 By working in sections, I had just one long seam at the end. 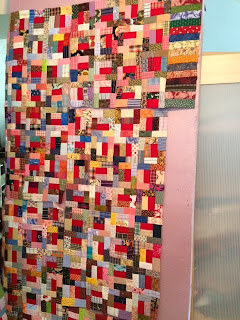 The fabric choices--I kept out most reds from the scraps--there are a few--because I wanted the solid reds to shine. The scraps are prints and plaids (lots of shirt parts), lights and mediums and darks.  I made sure each block had some of each. 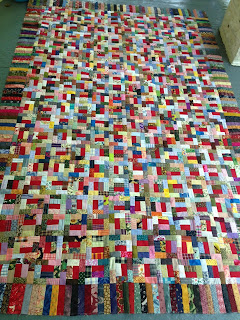 This is my design. Let me know if you use this idea and where it takes you! 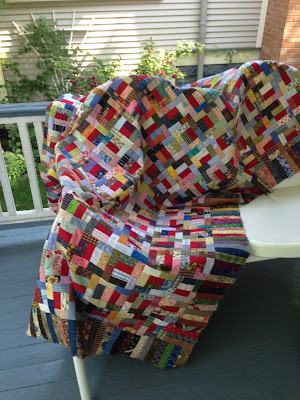 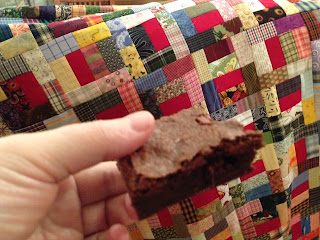 My family loved brownies and I like to use the One-Bowl Brownies on the Bakers unsweetened chocolate package.
Because I cannot leave well enough alone and because I like a thicker brownie, I make the recipe with 1 1/2 times the ingredients, add a bit of salt, and add walnuts.

Put into a pyrex two quart bowl and microwave for 2 1/2 minutes:
6 squares unsweetened chocolate
1 cup plus 2 tablespoons butter
Take out and stir until chocolate is melted.

One at a time stir in:
5 large or 4 extra large eggs